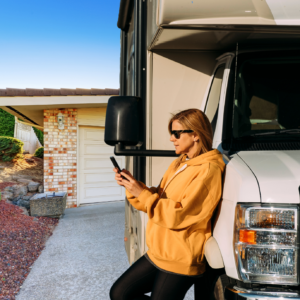 I have finally done it! I finally bought my home for the next few months!

Did I spend almost a month doing research on what rig to get for my trip? Yes, yes I did. Did I manage to sucker my cousin Adam into driving me to the No Bull RV lot to pick up my new baby? Yes, yes I did.

I am now the proud owner of a 2016 Sunseeker! Yay me! I have decided to name her Winnie. And dang does she look good on my driveway.

I had debated getting a Class B motorhome which would’ve been smaller and had more maneuverability which I really wanted, but I wasn’t a fan of the bathroom set-up in every model I looked up. So, when I was talking to the salesperson, they brought up a Class C which ended up fulfilling what I was looking for!

My major, rock-solid must-haves were simple: good storage throughout, the master bed can be sectioned off from the living area, a well outfitted kitchen with an oven, low-ish mileage, no bunks, and an inoffensive internal color scheme. Afterall, if I’m going to be living here, I want to wake up to some pleasant décor. I bent on a few lesser important things, like I really didn’t need the exterior kitchen, but that’s actually an unexpected boon and will be great when I do my meal prepping so I’m pretty happy with my choice. As I was doing the final walkthrough, I got more excited; suddenly I was picturing myself in it, how I was going to organize everything and decorate. Absolutely giddy!

So, I got my major must-haves, plus, this model already had a bike rack installed on the back which is AWESOME! I was so prepared to have to get one but this saved me the time and energy (and cash!) Hilariously there’s a ding in the back bumper in a similar spot to my old junkbox car, definitely a sign she was meant to be mine.

My friend, Meg, is going to come out with me as we head through Alberta; our rough plan is heading towards Banff then entering BC. There was a bit of a debate on north or south routes, she was championing for Revelstoke, I was saying Radium. We decided to go with the more southern route after a valiant argument of rock-paper-scissors and I sold her on visiting Fairmont Hot Springs so we could spend a day floating the Columbia River. We’ll be towing her car behind Winnie so we won’t have to walk down from the campsite. From there we’ll figure out our stops up to Hope and part ways. I’m definitely not getting any closer than that to Vancouver; I don’t feel like trying to maneuver the bridges with a camper!

How many blankets is too many? Currently debating because I think I’ve maxed out my storage space; but otherwise everything is loaded and ready to go for next week. Now for my final food prep!